NY Post: NYC will pay you for ratting out idling trucks, buses 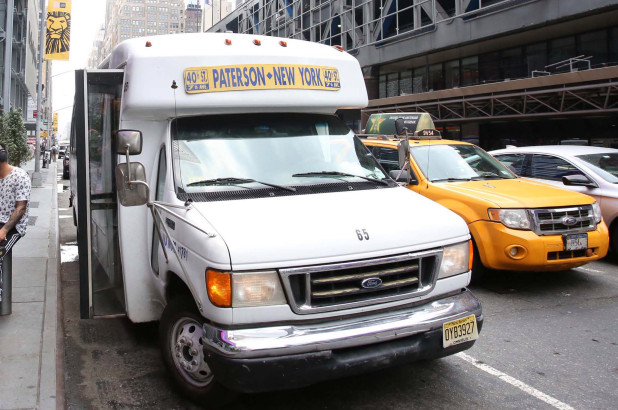 The Big Apple’s streets really are paved with gold — for anyone willing to rat out idling trucks and buses.

The city is paying cash bounties to tipsters who turn in commercial drivers for leaving their engines on while parked by a curb for more than three minutes — or a mere minute in a school zone.

The rewards amount to 25 percent of the fines imposed, which range from $350 to a maximum of $2,000 for a repeat offence.

And time-stamped photos or videos are all the evidence that’s needed to file a complaint with the city Department of Environmental Protection.

Since a new law went into effect in February, the agency has received 210 citizen complaints that led to 61 summonses, 20 of which were sent to the Office of Administrative Trials and Hearings, officials said.

The office’s judges have so far upheld four of the tickets, imposing fines of $350 each, with the tipster rewarded $87.50 each time.

The office couldn’t detail how the other 16 summonses were resolved and said hearings had yet to be set for the other 41.

The DEP has an official complaint form and detailed instructions available on its website but hasn’t publicized the potentially lucrative pollution-control program. 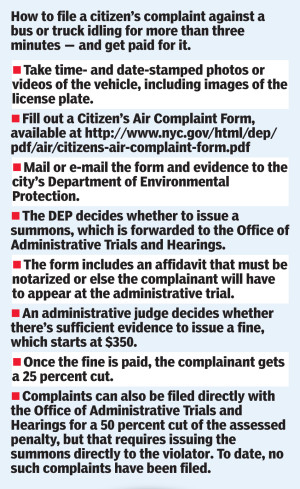 Officials said the agency might advertise in the future if it doesn’t start receiving more citizen complaints.

The bounty program was enacted following more than a decade of anti-idling activism by George Pakenham, an Upper West Side banker who was the subject of a 2012 documentary film titled “Idle Threat: Man on Emission.”

Last year, he told a meeting of the Hell’s Kitchen South Coalition that he had netted $3,000 in judgments against bus companies by commencing civil proceedings under terms of the city’s Administrative Code when the DEP declined to prosecute cases he referred.

In an email last year, he also boasted that “clean air can be monetized . . . to the benefit of all,” according to a source who received the message.

Records obtained by The Post show Pakenham scored one of the recent rewards, for reporting an Air-Wave Air Conditioning Co. truck he caught idling at West 74th Street and Amsterdam ­Avenue in Manhattan on April 7.

The three other bounties all went to Dominick Eckenstein, a former Brooklyn resident who now lives on a farm in upstate Copake.

His payouts came for reporting a Mueller Distributors beverage truck outside a restaurant in Carroll Gardens, Brooklyn, a Trailways of New York bus on Eighth Avenue near Times Square, and an ACV Enviro waste-removal truck near City Hall.

All three of those incidents took place in January, but Eckenstein got paid because the hearings were held after the law went into effect, officials said.

Eckenstein said he had filed more than 20 complaints after learning about the new law “through a friend,” but he wouldn’t say it was Pakenham, who declined to comment.

Just four people filed the complaints that led to all 61 summonses, with the other two identified by the DEP as ­David Dong, whose LinkedIn profile identifies him as a banker, and Tevin Grant, a DEP lawyer.

Neither returned messages seeking comment, and officials said it wasn’t clear whether Grant would be eligible to collect on his complaints.

New York City has restricted curbside idling of all motor vehicles since 1971, with exceptions for emergency vehicles and vehicles whose engines are needed to run refrigeration units or lifts.

Exceptions are also made for buses with passengers that need to use their heating or cooling system while temporarily parked.

Councilwoman Helen Rosenthal (D-Upper West Side) was the prime sponsor of the reward provisions, which she first introduced almost three years ago.

“Vehicle idling is one of New York City’s most intractable environmental issues... but the law is extremely difficult to enforce,” said a spokeswoman for her office.